After years of serving homeless people on the weekends, Nathan Ganeshan felt confident that the simple act of feeling clean and refreshed would not only renew their spirits, but also give them dignity.

He got down to fundraising and planning. Then when he saw a truck dragging a trailer with showers into the First Presbyterian Church parking lot in 2018, Ganeshan said he was almost overwhelmed.

“When the shower trolley pulled up, I choked. It was very emotional, ”said Ganeshan. “It was a dream that came true. I will never forget this day.”

Now, twice a week, a Dignity on Wheels truck stops in the downtown church with showers, bathrooms, washers and dryers for the homeless.

Ganeshan was impressed with the gratitude of those who have so little. After showering, a homeless man thanked him, the community and everyone who made the shower possible, Ganeshan said.

Ganeshan has always been motivated to help others – and to make dreams come true.

When he was a young boy growing up in India, Mother Teresa inspired him to feed those in need on his birthdays.

“When you fill your hungry tummy on your special day, it makes more sense and makes it more enjoyable,” he said.

On special occasions, Ganeshan and his family celebrated by giving back to the community and inspiring others to do the same.

“When you are doing something good, it is important to involve your family and then your community,” said Ganeshan. “I wanted to be a role model for my children.”

Almost 10 years later, Ganeshan was walking past a park one day and impulsively buying pizza for a homeless man. Feeding the needy became a lifestyle, especially after his release in 2012. At that point, he and his family went to St. James Park on Sundays to give the unhoused pizza, bananas, cookies, and water.

The news spread on social media and soon his friends began sponsoring him in celebration of their children’s birthdays, and sometimes joining the distribution.

“It was heartwarming to me,” said Ganeshan. “People got food.”

Families can sponsor care bags for their children’s birthdays and have them filled by children at their parties to make their celebrations charitable. Photo courtesy Nathan Ganeshan.

One Sunday morning, Ganeshan skipped his regular visit to the park – his son had a tennis tournament. On the way to the game, his seven-year-old son Saicharan asked him, “What about the people in the park? Aren’t you waiting for us? Who will feed them? ”

Ganeshan said that a small spark ignited the idea of ​​community seva, which feeds the hungry and serves the homeless.

Since it started in June 2013, the non-profit organization has grown to 2,900 volunteers. It has served 190,000 meals in six homeless shelters and camps.

During the winter months, the non-profit organization distributed more than 8,000 blankets. After a homeless man told Ganeshan that he found the blanket difficult to wear, Community Seva began providing backpacks with a blanket, hat, gloves, socks, rain poncho, and hygiene kit. Today more than 9,000 backpacks and 3,600 feminine hygiene kits were distributed.

“Nathan is an amazing person,” said congregation member Ash Kalra. “He not only saw the need but also felt compassion for those he served.”

When the parents asked Ganeshan how they could involve their younger children in philanthropy, Ganeshan suggested that the families sponsor care bags that the children could fill at birthday parties. Soon, filled hygiene kits were filled with personal encouragement notes. Community Seva has distributed more than 8,000 care bags.

It is the little things that mean the most to Ganeshan. He was moved to watch a mother have breakfast with her children at the LifeMoves homeless shelter, knowing that community seva had made this possible by providing the food.

During the pandemic, community seva continued to serve approximately 1,500 meals a week. Since Ganeshan could no longer prepare meals in homeless shelters, he rented a small commercial kitchen in San Jose and let four restaurants help him, who provided groceries and paid them to cook.

When people lost their jobs and homes, Community Seva supported 75 families living in parking lots with RVs and cars, bringing them hot meals, milk and water. 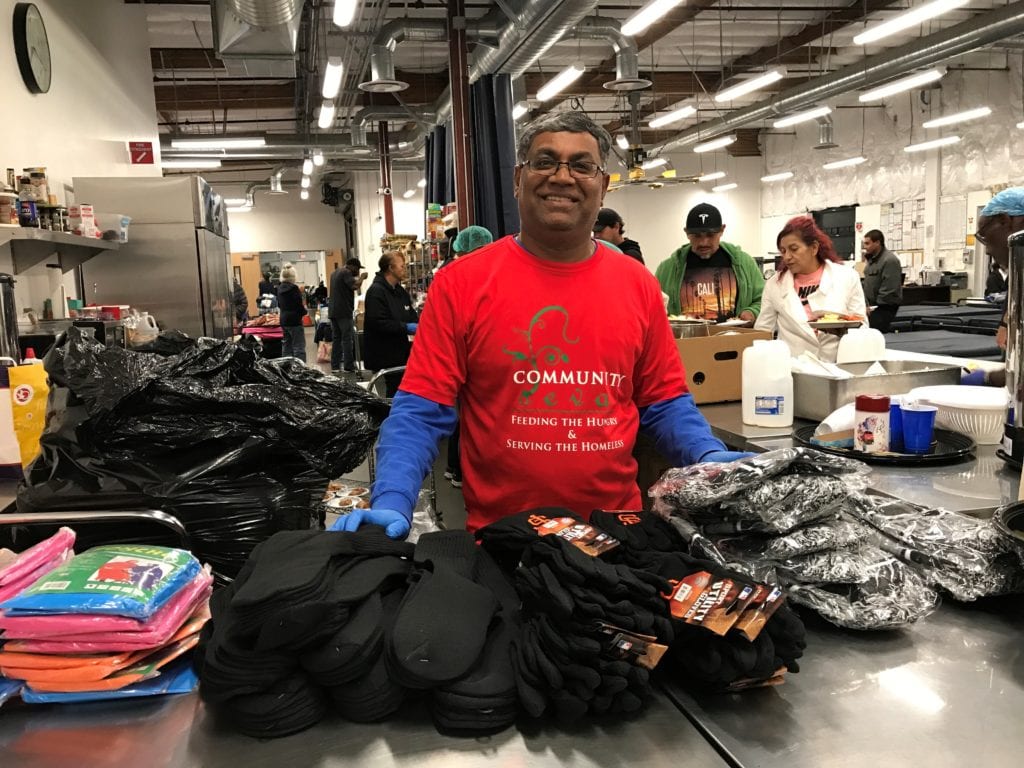 Nathan Ganeshan founded the Seva nonprofit community in San Jose to feed and serve the homeless. The residents of the shelter in Sunnyvale were given gloves, hats and socks. Photo courtesy Nathan Ganeshan.

On his 16th birthday, Saicharan raised $ 300 on Facebook for bags of macaroni and cheese, ramen, beef dried meat, energy bars and fruit for the seniors.

Although helping the seniors should be a one-time thing, Ganeshan has been out every Sunday for seven months.

“Nathan never says ‘no’,” said Shaunn Cartwright, a housing rights attorney. “He’s always there to help. He may look like a soccer dad, but he has no fears or judgment. “

Ganeshan’s dream is now to open a homeless shelter that offers psychological support and work preparation as well as beds and hot meals.

“Starting a shelter is something he could actually do with that spirit,” said Cartwright.

As his mission grew, Ganeshan turned to annual fundraising galas to advance the goals of community seva. Donations can be made via PayPal at [email protected]

“Hungry people are waiting for us,” said Ganeshan. “The community is behind us. We are obliged.”